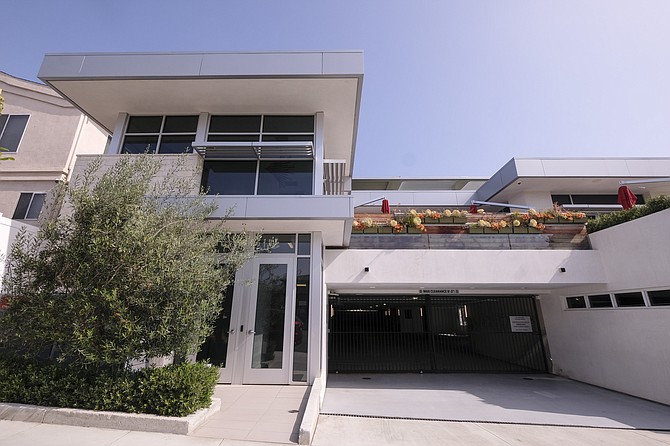 K1, which plans to raise $4 billion in its latest fund, is based in Manhattan Beach. Photo by Ringo Chiu.

The private equity industry is revving up in Los Angeles, but much of the action is taking place behind a financial curtain that can be difficult to draw back.

The raise, K1’s biggest to date, is more than twice as large as the firm’s previous fund three years ago.

The new fund, K5 Private Investors, came to light in late April as K1 has made pitches and gone shopping for funding commitments with government-run pension agencies.
K1 executives declined to discuss details of the fund, which is nearing a final close this spring.

The firm’s filings with the federal government and a state-run pension fund in Connecticut offer a rare behind-the-scenes look at the workings of a private equity fund.

Documents show that Connecticut contributed $125 million to the new K1 fund while the city of San Francisco’s employee pension fund kicked in $50 million.

Sawtelle-based Leonard Green & Partners, for example, made disclosures with state- and county-run pension agencies about investment activities from Ventura County to Minnesota.

Dan Gallagher, chief investment officer with the Ventura County Employees’ Retirement Association, said in an email that his agency committed up to $15 million to a Leonard Green fund called Green Equity Investors VIII. As of Dec. 31, the county agency had paid in less than $2 million.

The Minnesota State Board of Investment has committed $150 million to the fund, according to the filings.

“This is nothing new. It’s been around for two or three decades now, pension funds investing in private equity in one shape or form. It’s very common to have an allocation of your portfolio for private equity, including not just buyout funds, but real estate, software and all kinds of different flavors,” said Arthur Korteweg, a private equity expert and associate professor of finance and business economics with the USC Marshall School Business.

“But what has been happening over time, since the mid-1990s, is that the pension funds have started to allocate more to larger private equity funds. Whereas they used to allocate in the low single digits, it’s now 10%, 11% or even 15% or larger allocations. It has grown quite dramatically. You are seeing more billion-dollar funds now than 15 years ago,” he added.

Private equity strategies like those used by K1 and Leonard Green are typically kept out of the public eye.

An April 20 government securities filing provided insight into K1’s K5 Private Investors fund. Hartford, Conn.-based Connecticut Retirement Plans and Trust Funds, a $30 billion state-run manager of pension funds, was notified by K1 in November that it had targeted commitments of $3.25 billion with a hard cap of $3.9 billion for its fifth fund, according to a letter filed with the Connecticut fund manager.

The amount raised for K5, including the Connecticut and San Francisco investments, has now edged to just above $4.01 billion, according to a filing with the Securities and Exchange Commission on April 20.

“As the pension fund builds a track record with a private equity fund, like K1, the fund size grows over time. That’s certainly a normal part of their business,” USC’s Korteweg said. “If the first fund does well, you’re able to raise more because they might have become more skilled investors than the first time.”

This isn’t the first time K1 has gone to a state for investment in one of its funds.
Its fourth fund, which raised $1.5 billion, invested in lower-mid-market enterprise software companies with annual revenue up to $50 million.

In 2018, the Pennsylvania Public School Employees’ Retirement System committed up to $100 million to the K1’s fourth fund, which was expected to make 10 to 15 investments in business-to-business enterprise-software companies, according to the state-run $62 billion retirement system.

Other managing partners at K1 include Hasan Askari, Taylor Beaupain and Dan Ghammachi.

Larger investments by public agencies in private equity vehicles sometimes lead to disputes over how the funds are managed.

Leonard Green is currently ensnared in a dispute with Rhode Island Attorney General Peter Neronha over how much money the firm can extract from its proposed sale of two Providence, R.I., hospitals.

Leonard Green acquired the hospitals nearly a decade ago when the firm purchased a majority stake in Palms-based hospital and physician group Prospect Medical Holdings Inc. for $363 million in cash and debt, taking the company private.

Neronha wants Leonard Green to provide financial security and “ensure the continuity of health care services and operations at the hospitals for at least five years,” should the private equity firm move forward with the sale, according to a statement from the AG’s office.

Leonard Green has been unwilling to make such assurances, so the firm halted the sale process on April 30, a spokeswoman with the Rhode Island Attorney General’s Office confirmed.

Neronha has grown impatient with Leonard Green because he believes that the private equity firm has taken “hundreds of millions of dollars from the hospitals and services they own” for the purpose of making dividend payouts to investors with no prospect of improving the hospitals or their services, the spokeswoman explained.
The Rhode Island hospitals also have been left with a billion dollar-plus bag of debt, she said.

A Leonard Green spokesman countered in an email that Neronha’s statement “stands in stark contrast” to the approval of the transaction by Rhode Island’s Health Services Council, which consults on health care facility licensing reviews.

He noted that Prospect Medical has in excess of $500 million of liquidity and is well-capitalized to continue to invest in all 17 hospitals it manages.

“All indebtedness incurred in connection with past dividends has since been repaid and has had no impact on Prospect’s ability to provide quality care,” he wrote.

Leonard Green, which was founded in 1989, has raised more than $40 billion of committed capital. Its eighth flagship fund, Green Equity Investors VIII, and its middle market fund, called Jade Equity Investors, were raised in 2019 with commitments totaling $12 billion and $2.75 billion, respectively.

Green died in 2002, leaving the firm to be run by today’s managing partners, John Danhakl and Jonathan Sokoloff. Peter Nolan was part of this original group of managing partners to run Leonard Green, but he retired and transitioned to his current role as senior adviser in 2014.

For reprint and licensing requests for this article, CLICK HERE.

Around 20 people in France detected with Indian COVID variant -health minister – Reuters
I Cold-Emailed Mark Cuban About My Company and Got a $1 Million Investment. Here’s How I Did It – Entrepreneur

The investor who incorporates altruism…

No end to investment whiplash…