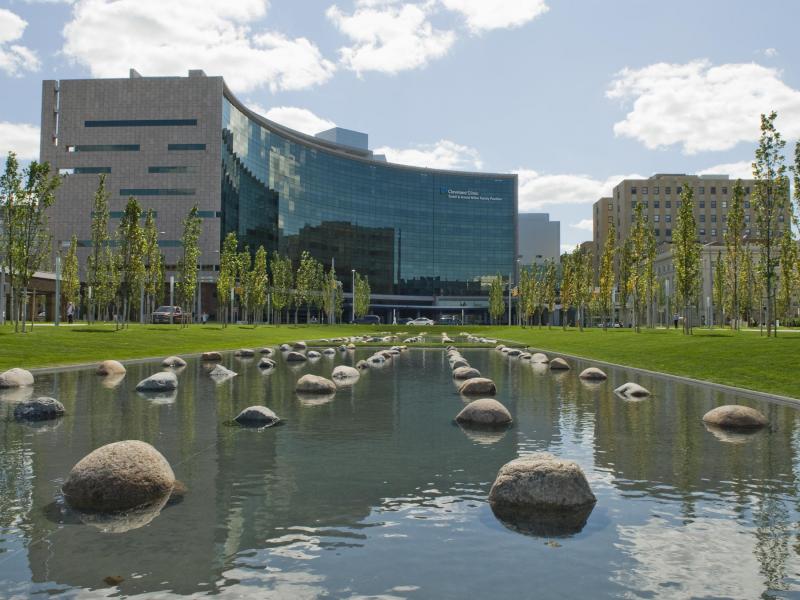 When the first COVID-19 cases were detected in Ohio, normalcy became a thing of the past, lives were upended and virtually every industry was impacted.

As hospitals prepared for an anticipated overwhelming surge, they asked for the public’s help in March to “flatten the curve.” In the summer, they urged the community to help slow the spread of coronavirus as numbers began to spike again.

And in early November, they begged for vigilance as cases, deaths and hospitalizations climbed and hundreds of employees called out sick — unprecedented statistics in an already unprecedented pandemic.

In April, Cleveland Clinic and Case Western Reserve University began temporarily converting the Health Education Campus (HEC) into a surge hospital, and leaders told Crain’s the health systems were taking an all-hands-on-deck approach to staffing as they planned for the worst.

Though the HEC wasn’t ultimately used for patients, bed capacity and staffing are again top of mind. Northeast Ohio hospitals have had time to build larger inventories of personal protective equipment (PPE) after shortages presented a major concern in the spring. They are confident in their plans to grow their bed capacity if needed and are working to ensure sufficient caregivers available to staff those beds, even as droves of employees have been out sick due to COVID-19 (positive or quarantined).

2020 has necessitated an intricate coordination of resources, which has in turn, dramatically impacted hospitals’ finances. The pandemic and postponement of nonessential procedures in the spring meant $2.38 billion in lost revenue and emergency expenses between March 9, when a public health emergency was declared, and May 1, when some elective procedures resumed, according to Ohio Hospital Association figures this summer. Cleveland Clinic opted in mid-November to postpone some nonessential procedures for a couple of days and eventually extended that through the end of the year.

Though various federal support helped offset lost revenue and added costs this year, an association spokesman said Ohio hospitals were still left with a $1.84 billion funding gap at the end of November and hospitals continue to lose an estimated $6 million in revenue each day.

In general, Northeast Ohio’s hospitals were in a good place financially at the start of 2020, according to a report released in November, and they had continued to grow before the pandemic, according to Crain’s data.

They began prepping for big financial losses this spring, such as UH consolidating services and temporarily reducing hours and pay for employees not directly involved in patient care.

Researchers across the region joined the race to find treatments and develop vaccines. They served as sites for clinical trials for vaccines and drugs, explored better ways to treat COVID-19 patients, studied better ways to protect clinicians, developed new decontamination methods for PPE, created a tool to help map COVID-19 risk, developed a model to predict likelihood of testing positive for COVID-19 and outcomes and much more.

Biotech companies in the area also jumped in. Cleveland biotechnology company Athersys Inc. (Nasdaq: ATHX) initiated a study in April to evaluate using its MultiStem stem cell therapy to treat COVID-19-induced acute respiratory distress syndrome (ARDS). In December, Multi Radiance Medical prepared to apply for emergency use authorization with the U.S. Food and Drug Administration (FDA) for the use of the company’s super pulsed laser therapy technology to improve respiratory function in critically ill COVID-19 patients who have been placed on ventilators.

Alongside all of these efforts, health systems also quickly started up and/or expanded telemedicine options, the use of which skyrocketed in the early months of the pandemic as patients, payers and providers long skeptical of the technology began seeing its benefits. Remote patient monitoring also became a major focus with options for patients to monitor their vitals at home.

Virtual care options are expected to continue to be a bigger part of health care going forward than they were before the pandemic. Throughout the year, hospitals have seen a concerning pattern of patients deferring care and are urging patients to seek the care they need.

While COVID-19 was no doubt the story of the year, Northeast Ohio’s health care scene grabbed headlines for several other reasons.

The region’s health systems continued their growth and consolidation trends of past decades.

Lake Health, which in early 2020 announced its search for a strategic partnership, reached an agreement to join University Hospitals, pending regulatory approval, the two announced in December.

The news came a month after UH announced it would gain a minority interest in Western Reserve Hospital, an independent, physician-owned hospital in Cuyahoga Falls. It will be UH’s first inpatient presence in Summit County where hospital ownership has shifted dramatically in the past few years, including in 2015 when Cleveland Clinic acquired Akron General Health System.

At the start of 2020, Summa Health was taking steps toward becoming a subsidiary of Southfield, Mich.-based Beaumont Health, but the deal fell apart. After pausing the process to focus on COVID-19, Beaumont ultimately walked away from partnership plans in May.

Though the pandemic initially slowed down the due diligence process, Cleveland Clinic ultimately reached an agreement with Sisters of Charity for Mercy Medical Center in Canton to become a full member of Cleveland Clinic. The deal is expected to be finalized Feb. 1, pending regulatory approval.

The Clinic also worked to grow its research capacity, establishing two new research centers in April following more than a year of planning: The Center for Immunotherapy and Precision Immuno-Oncology and the Center for Global and Emerging Pathogens Research. This summer, the system also opened its 107,000-square-foot Florida Research and Innovation Center in Port St. Lucie, Fla., which will collaborate with researchers in Cleveland.

Meanwhile, MetroHealth continued its own expansions this year. Alongside the ongoing construction for its nearly $1 billion campus transformation, the system this year announced a $42 million project to expand the number of behavioral health beds in Cleveland Heights and a $9 million investment into its Old Brooklyn campus.

MetroHealth also received a $42 million gift — the largest in its history — from JoAnn and Bob Glick to support programs that aim to reverse health inequities and improve community health in Greater Cleveland.

In addition to the growth of its health systems, Northeast Ohio’s health care options expanded with several newcomers to the region as the market — and demand — for outpatient health care continues to grow.

This year has presented what we all hope will be once-in-a-lifetime challenges. It has also sparked collaborations and innovation across the health care industry and beyond. With a vaccine offering a light at the end of the tunnel, health care leaders are beginning to think about how to draw on deepened relationships in the next normal. In the meantime, they continue to ask everyone to wear their masks, practice social distancing. wash their hands and stay safe, especially this holiday season.