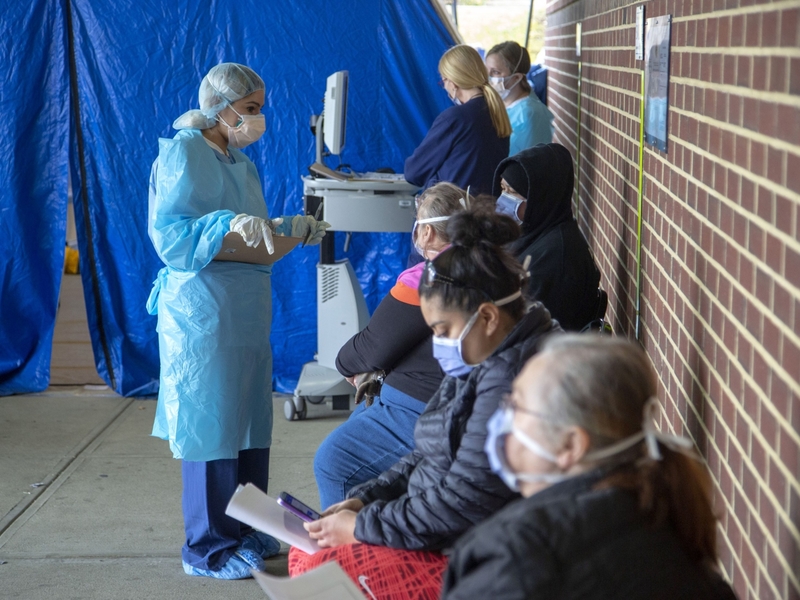 The Partnership for New York City released a report on Monday that demonstrated Blacks and Hispanics are disproportionately affected by Covid-19 compared to other ethnic groups.

Written with Deloitte, “Toward a Resilient System of Healthcare” calls for greater investment in preventive care measures to address underlying health conditions associated with socio-economic status.

The report concluded these numbers for Black and Hispanic populations are reflective of lower household incomes, a prevalence of underlying health conditions, greater food insecurity and overcrowded households.

“I think it’s a sad commentary that we have not done a better job and hopefully this is a moment when we’re going to focus on how we bring equity to the health care system,” said Kathryn Wylde, CEO and president of the Partnership for NYC.

Wylde added that she worked in community healthcare during the late 1960s when the New York region faced the same disparities in terms of access to preventive care for Blacks and Hispanics.

“The frustration is that this is 50 years old,” she said.

The report highlighted how these health disparities are tied to economic indicators.

Further discrepancies examined access to health care coverage and overcrowded homes. Between 8% and 10% of the population in Queens, Brooklyn and the Bronx does not have health insurance. In Manhattan, 6% of the population lacks healthcare insurance. Brooklyn and the Bronx have overcrowding rates greater than 10% while Manhattan’s overcrowding rate is less than 6%.

“The point of the report is that it’s not about medical care, it’s about looking at all the elements—environmental, social, economic—that impact health,” Wylde said.

In the near-term, the Partnership recommended taking a science-based approach to issuing public health guidelines concerning the virus. It encouraged an independent validation and self-certification program for healthy workplaces, including using gold-silver-bronze standards for HVAC building systems, cleaning, and use of elevators. The report also encouraged the city and state to create a more fluid system of online healthcare delivery to streamline treatment.

In the medium-term, in a shift away from the fee-for-service model, the report suggested the city allow for more healthcare to take place inside homes and at community health hubs rather than at hospitals. To this end the report cited the neighborhood health station developed by Blackstone Valley Community Health Care as its example.

In the same vein, the report called for increased public-private partnerships in the sphere of healthcare, using San Diego’s “Project One for All” as an example of how non-profit organizations can pair with local health care providers.

The Partnership’s report concluded with a series of long-term actions the city can take to improve its healthcare delivery system and prepare for future disruptive events like another pandemic. It suggested political leaders and health care interest groups reform Medicaid reimbursement to create incentives for consumers to enroll in preventive care programs built around healthier lifestyle changes.

Blacks and Hispanics have a higher prevalence in underyling conditions like diabetes and obesity compared to whites both nationally and in New York, according to the report.

The Partnership also encouraged anchor institutions with large amounts of capital like hospitals and investment banks to invest into areas that have a lack of food access, low health insurance rates, and a high percentage of overcrowded affordable homes.

“We have to integrate health and human services systems both in terms of information data and funding,” Wylde said.

Health-Care Heroes In The Pandemic: Portraits Of 3 Women : Goats and Soda – NPR
Should You Invest In A Moving Company? – NuWireInvestor – NuWire Investor