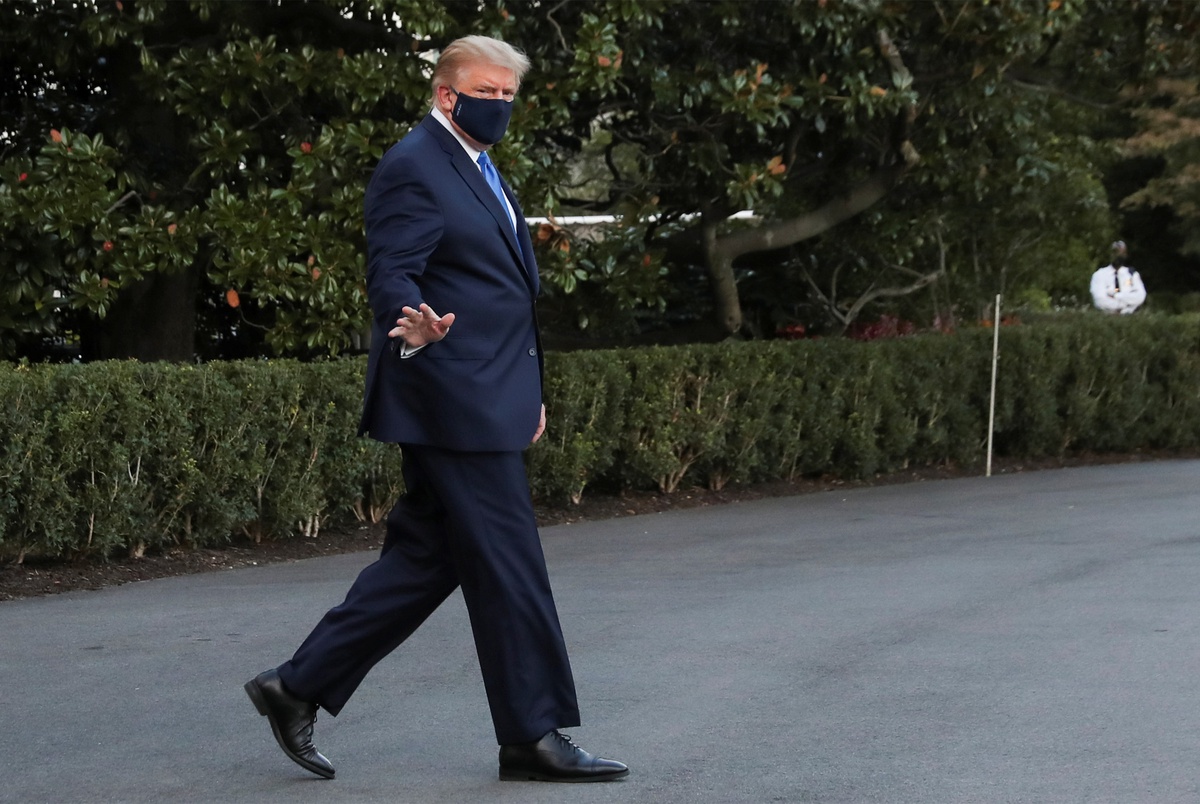 WASHINGTON — All three branches of the U.S. government were thrown into chaos on Saturday following President Donald Trump’s hospitalization for COVID-19 and a growing number of administration officials and key members of Congress announcing positive test results.

After a day of political mayhem and about 24 hours after disappearing into Walter Reed National Military Medical Center, the president appeared in a 4-minute video posted to his Twitter account Saturday evening. Dressed down — sports coat, no tie — he spoke with a slightly horse voice but didn’t appear seriously ill.

“I just want to tell you that I’m starting to feel good,” he said. “You don’t know — over the next period of a few days, I guess that’s the real test. So, we’ll be see be seeing what happens over those next couple of days.”

All day Saturday, medical professionals and some of the senior-most government officials issued statements about the president’s battle with the virus, only to backtrack on or contradict previous characterizations. The result was a nation left thoroughly in the dark.

After the president spent the night under treatment at Walter Reed, his physician, Dr. Sean Conley, emerged from the hospital on Saturday to offer a sunny outlook on the president’s prognosis. But minutes later, an unnamed White House official described the president’s circumstances as “very concerning” to reporters at the scene.

Almost simultaneously, the U.S. Senate canceled work in Washington next week, as a third Republican senator, Ron Johnson of Wisconsin, announced he tested positive for the virus. Given the impending U.S. Supreme Court confirmation hearing for Judge Amy Coney Barrett, there are increasing doubts over whether the Senate will have the capacity — and even the quorums needed — to handle that proceeding.

The upheaval began early Friday morning, when President Trump announced in an overnight tweet that he and First Lady Melania Trump had tested positive for COVID-19. By Friday evening, he was on a Marine One helicopter flight from the White House to the Walter Reed medical facility.

On Saturday morning, an upbeat Conley delivered remarks to the country, saying that Trump was “doing very well.” But he brushed off reporter questions about the extent of Trump’s treatment.

And minutes later, a person identified as a source familiar with the president’s health told reporters: “The president’s vitals over the last 24 hours were very concerning and the next 48 hours will be critical in terms of his care. We’re still not on a clear path to a full recovery.” The Associated Press attributed that comment to White House chief of staff Mark Meadows.

Adding to the intrigue was a detail tucked away in Conley’s remarks: That Trump’s diagnosis came 72 hours prior to Saturday — a full day before Trump announced positive results. Two hours later, Conley released a statement through the White House with a subject line of “Timeline Clarification.”

“This morning while summarizing the President’s health, I incorrectly used the term ‘seventy two hours’ instead of ‘day three’ and ‘forty eight hours’ instead of ‘day two’ with regards to his diagnosis and the administration of the polyclonal antibody therapy,” he wrote. “The President was first diagnosed with COVID-19 on the evening of Thursday, October 1st and had received Regeron’s antibody cocktail on Friday, October 2nd.”

Later in the afternoon, Meadows weighed in again, painting a rosier picture.

“The president is doing very well,” Meadows told Reuters. “He is up and about and asking for documents to review. The doctors are very pleased with his vital signs. I have met with him on multiple occasions today on a variety of issues.”

Since the revelation that Trump tested posted for the virus, an additional series of senior Republican officials who were in proximity to the president at Barrett’s recent nomination announcement during campaign travel or in preparation sessions for last Tuesday’s debate have announced that they, too, had contracted the virus.

U.S. Sen. Ted Cruz said on Saturday that he took a test in light of the virus spreading among his Senate colleagues, including his friend and fellow member of the Senate Judiciary Committee, Republican U.S. Sen. Mike Lee of Utah.

“After interacting with Sen. Lee, in consultation with the attending physician, Sen. Cruz is remaining at home out of an abundance of caution,” a spokesperson said.”He feels healthy, hasn’t exhibited any COVID-19 symptoms, and has tested negative.” COVID-19 tests don’t always catch the virus in its early incubation periods.

It remained unclear on Saturday how any of these events would affect the presidential and down-ballot campaigns in Texas and around the country. But Texas members of Congress, some of who are running for election, began to react to the news on Twitter.

“Im in Boerne, Texas, @realDonaldTrump – and they’re all pulling for you because they #StandUpForAmerica,” wrote U.S. Rep. Chip Roy, R-Austin. “They know it’s time for #NextManUp – together we stand for all the forgotten Americans who want to live free & who want leaders fighting for them against the swamp…”

Trinady Joslin contributed to this report.